MY YEAR OF FAIR ISLE

February just zoomed past...my Mother used to tell me that time flies faster as you get older...and she was right! (Mother's usually are, we just don't know it at the time.)

I'd set a goal to finish my Marie Wallin Fair Isle Club 3 project - Lerwick - by the end of the Olympics...or the end of February....whichever worked best. I was determined to finish, as I'd fallen off the schedule for the Fair Isle Club 1 blanket, and it still is far from finished. This was a goal I intended to keep!

I DID IT!!! February 28 I could say Lerwick was a Finished Project!!!!

Here are some links for you.

Inspiration...can you ever wear too much fair isle? Pringle of Scotland

My apology to Pringle of Scotland...I actually say Pringles in the video.
I must have been thinking of the potato chips !

My Next Project - Mousa from "Shetland" by Marie Wallin

A shortage of Jamieson's Shetland Spindrift? Could this be true?

The knit demo section starts at 17:50

I'm weaving in my ends on the underarm sleeve seam.

Knitting sleeves in the round.

Picking up stitches on the edge stitch of the steek. (More about steeks next month!)

Keeping your yarns from tangling whilst fair isle knitting!

March has come in like a Lion here....so I'm hoping for an early Spring. In the mean time, I'm still going to be knitting.

What are you doing to keep busy during the winter months?

Anne x
(with Lackie and Daisy at her feet...or on the couch) 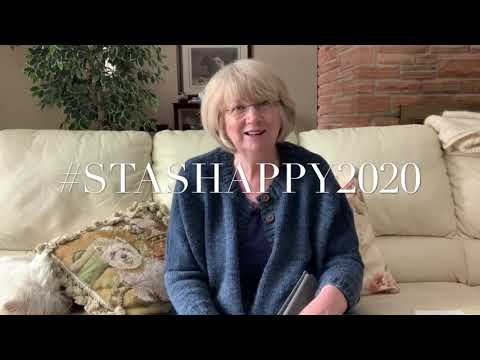